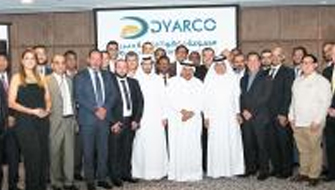 Dyarco & Intergroup – Principals Get Together Event

6 May 2017 – Doha, QATAR | Dyarco International Group W.L.L and Intergroup W.L.L is an affiliate of Al Faisal Holding and Ebrahim Al Neama Holding Group, jointly held their annual get together on Saturday 06 May 2017 at the Shangri-La Hotel in Doha.

The gathering was geared to foster increased communication levels and create business opportunities amongst the group companies. The event was also a special occasion to thank and reward all companies with whom Dyarco and Intergroup have had a long and sustainable business relationship.

One main highlight of the evening was the certificates and awards of appreciation presented by H.E. Sheikh Faisal bin Qassim Al Thani and Mr. Ebrahim Al Neama to representatives 40 companies who achieved a milestone of 10 years of partnership with either Group.

In his welcome speech, H.E. Sheikh Faisal bin Qassim Al Thani said “Intergroup and Dyarco were respectively established more than 30 and 20 years ago as small companies and I am proud to see that they have become 2 key players that serve the economy of Qatar”. Mr. Ebrahim Al Neama added “I strongly believe that both Groups have a tremendous potential of growth and will have many more business opportunities in the coming years as Qatar’s business market is expected to continue booming”. Mr. Ullattil Achu, the General Manager of both Dyarco and Intergroup, also highlighted the importance of developing the two Groups simultaneously, using each other’s strengths.

The announcement of the awards was followed by a networking session of participants and subsequently an informal interaction over dinner.